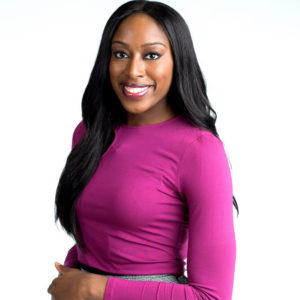 Chiney Ogwumike is a 2-Time WNBA All-Star for the Los Angeles Sparks and a full-time, multi-platform ESPN commentator and NBA analyst. In August 2020, she became the first Black woman to host a national, daily sports-talk radio show. Most recently, Chiney became a regular on ESPN’s NBA Today and NBA Countdown. The 2021 Forbes 30 under 30 honoree also holds the title of Executive Producer, producing an ESPN Films documentary “144” on the 2020 WNBA season.

The 1st overall pick in the 2014 WNBA Draft from Stanford University, Chiney Ogwumike was the 2014 WNBA Rookie of the year and is a 2-Time WNBA All-Star (2014, 2018). Chiney is also the vice president of the WNBA Players Association (WNBPA).

In 2018, Chiney became a full-time multi-platform ESPN NBA Analyst, becoming one of the youngest national sports studio analysts and one of the only full-time professional athletes to currently hold a regular national sports media position. In her role, she makes regular appearances as an NBA studio analyst on SportsCenter, First Take, Get Up!, NBA Today and NBA Countdown. Chiney originally joined ESPN in 2017 to co-anchor SportsCenter across Africa and work as a WNBA and NBA analyst in studio.  As on-air talent, Chiney has worked as an analyst for ESPN and Pac-12 Network; analyst for NBATV; and co-host for studio shows such as ESPN’s First Take, SportsNation, The Jump, and Pac-12 Network’s Sports Report.

The 6'4" forward and Cypress, Texas native graduated from Stanford University with an International Relations degree under the mentorship of Dr. Condoleezza Rice. Chiney led Stanford to three Final Fours while distinguishing herself in academics, earning multiple honors for her academic success, including being named the 2014 Capital One Academic All-American of the Year and the Pac-12 Women's Basketball Scholar-Athlete of the Year.

Chiney is passionate about giving back and empowering the next generation. Chiney spent the spring of 2013 studying abroad in Nigeria where she successfully raised $30,000 to build a basketball court for underprivileged youth in an effort to break down barriers for girls in sports and instill confidence in the next generation. Chiney and Nneka partnered with UNICEF in 2014 to raise almost $10,000 for girls’ education and empowerment in Nigeria. Chiney has made numerous trips to Africa with NBA Africa and other nonprofits to help launch youth engagement initiatives using basketball as a tool for development, including a 2017 trip to Rwanda with nonprofit Shooting Touch to celebrate International Women’s Day.