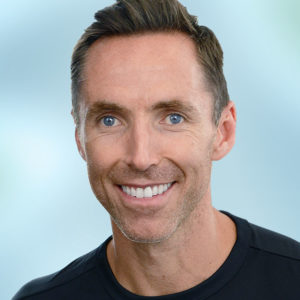 Born in South Africa to British and Welsh parents and raised in British Columbia, Canada, Stephen John Nash is a two-time NBA MVP and 8-time NBA All-Star. A recipient of the Walter Kennedy Citizenship Award and member of the Phoenix Suns Ring of Honor, Steve retired from the NBA in 2015 as the oldest player to lead the league in assists, its all-time free-throw percentage leader, and an unprecedented four-time member of the 50/40/90 Club, having shot at least 50% from the field, 40% from the 3-point stripe, and 90% from the line for more seasons than any other NBA player in history. He now serves as a player development consultant to the Golden State Warriors and as General Manager of Canada Basketball's Men's National Team, and is a first-time nominee to the Naismith Memorial Hall of Fame's class of 2018. Off the court, Steve continues to deliver assists every day as President of the Steve Nash Foundation, a U. S. and Canadian charity dedicated to assisting underserved children in their health and education, with innovative new platforms addressing early childhood neurodevelopment and health-focused athlete development for children and adolescents. He has been named to the Order of Canada and Order of BC, and awarded numerous honors for his humanitarianism and dedication to service. Steve is an engaged investor, including ownership stakes in the Vancouver Whitecaps and Real Mallorca football clubs, and a film production company, Control Media. Steve lives in California with his wife, Lilla, and their family.