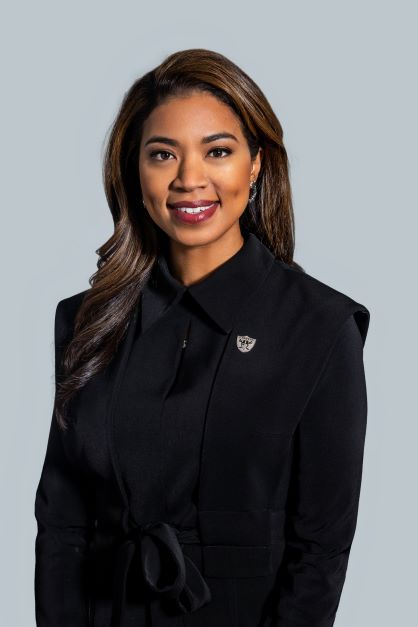 Sandra Douglass Morgan is a visionary and trailblazer with more than two decades of leadership experience in the sports, gaming, legal, and corporate sectors. She has served as a chief regulator, director, attorney, and advisor to integrated resorts, casinos, and telecommunications companies. No stranger to historic firsts, Sandra was named President of the Las Vegas Raiders by Owner Mark Davis in July of 2022, making her the first Black female team president in the National Football League’s history. Having an adept understanding of the community as a native Las Vegan, Sandra accepted the role with the vision of making the city the sports capital of the world.

Prior to joining the Raiders, Sandra served as Chairwoman of the Nevada Gaming Control Board. As the chief regulator for Nevada’s dominant billion-dollar gaming industry, Sandra led the passage and implementation of cashless wagering regulations, ensured that gaming licensees adopted policies prohibiting discrimination and harassment, and led a team of 400 employees in five cities across the state of Nevada. The Las Vegas native was the first person of color and the second woman to serve as Chair in the state’s history. Sandra also served as a Commissioner on the Nevada State Athletic Commission and was the first Black City Attorney in the State of Nevada when she was the chief legal officer for the City of North Las Vegas, where she served from 2008 to 2016.

Sandra was previously Of Counsel with Covington & Burling, LLP and also served as an advisor to the State of Nevada’s COVID-19 task force charged with finding solutions for personal protection equipment, virtual education options, and expanding testing capabilities so that the state could re-open the city to tens of millions of visitors from across the globe.

Widely recognized for her business acumen, unflappable leadership, and support for local causes focused on children and philanthropic initiatives for women and girls, Sandra is the recipient of the UNLV Boyd School of Law’s Distinguished Service Alumni Award and the Corporate to Community Connector Award from the National Urban League Young Professionals. She was honored as one of the most influential “Women in Business and Politics,” receiving an award from the Urban Chamber of Commerce in 2015 along with the Ladies of Distinction Award in 2013 from Olive Crest, a non-profit organization dedicated to assisting abused and neglected children. In 2012, Sandra was named Attorney of the Year by the Las Vegas Chapter of the National Bar Association in recognition of her commitment to serving the local community, especially communities of color.

Sandra has chaired a variety of nonprofit boards and is currently the host committee vice chair of Super Bowl LVIII, which will take place at Allegiant Stadium in 2024, marking the first time Las Vegas and the state of Nevada will host one of the most-watched annual sporting events in the world. Additionally, Sandra serves on the Board of Directors of Allegiant Travel Company (NYSE: ALGT) and Fidelity National Financial, Inc. (NYSE: FNF). She is also a member of the State Bar of Nevada and the District of Columbia Bar.Sandra graduated from the University of Nevada, Reno with a degree in Political Science and holds a Juris Doctor from the William S. Boyd School of Law at the University of Nevada, Las Vegas. The daughter of a retired U.S. Air Force Veteran and first-generation immigrant, she currently resides in Las Vegas with her husband Don Morgan, a former NFL safety, and their two children.