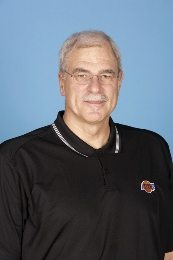 Head Coach, Player and Member of Basketball Hall of Fame

Head Coach, Player and Member of Basketball Hall of Fame In 11 seasons as Head Coach of the Los Angeles Lakers, Phil Jackson's results after coming west were nothing short of amazing. In his first three seasons, Jackson led the Lakers to three consecutive NBA Championships (2000-02) for the first time in franchise history (Los Angeles era). First with the Chicago Bulls (1991-1993 and 1996-98) and then with Los Angeles (2000-02, 2009-10), Jackson won an NBA Championship (11 times) more than half of the time he spent as a head coach (20 years) and visited the NBA Finals (13 times) even more often. A member of the Naismith Basketball Hall of Fame, Jackson, the longest tenured and winningest head coach in franchise history, led the Lakers to victories in 68 percent of the team's contests and compiled a 610-292 regular season record. Following the Lakers four-game sweep of the New Jersey Nets in the 2002 NBA Finals, Jackson became the first person in NBA history to lead a team to three consecutive championships three different times. In 20 seasons as an NBA head coach, Jackson posted a mark of 1,155-485 (. 704), which is the best winning percentage of any coach in NBA annals. The fastest coach in NBA history to 1,000 career victories, his total of 1,155 regular season wins ranks him 5th all-time. During the 1999-2000 campaign, his first in Los Angeles, Jackson led the Lakers to a 67-15 record which represents the second-best mark in franchise history. His postseason resume is even more impressive. Jackson led the Lakers to five NBA Championships, seven Western Conference Titles and a 118-63 mark in the playoffs including the team's 15-1 (. 938) run during the 2001 NBA playoffs, which is the highest winning percentage for any club in a single postseason in league history. With a career postseason record of 229-104 (. 688), Jackson has the highest playoff winning percentage of any coach in NBA history while his 229 wins are also the postseason benchmark for head coaches. With his 11th NBA Championship as a head coach in 2010, Jackson moved further past Red Auerbach (9) for the most titles won by a head coach in NBA history. Throughout his postseason career, Jackson-led teams have been a difficult out. When winning Game 1 of any playoff series, best-of-five or best-of-seven, his teams were 48-0, having gone 24-0 with Chicago and 24-0 with the Lakers. When holding a series lead of any kind, Jackson's teams were 56-1 all-time. Over a span of postseason series dating from 1996 up until 2003, Jackson led his teams (Bulls and Lakers) to victory in 25 consecutive series, another NBA record. During the 1995-96 season, Jackson led the Bulls to the NBA's best-ever regular season record at 72-10. One year later he was at it again, leading Chicago to the second-best-ever NBA regular season mark at 69-13, tying the 1971-72 Lakers. Jackson garnered 1996 NBA Coach of the Year honors and on December 7, 1996, was named one of the 10 greatest head coaches in NBA history. Returning to the Lakers on June 14, 2005, Jackson originally joined the franchise as the 15th head coach in the Los Angeles era on June 16, 1999 after a one-year sabbatical which followed 12 incredibly successful seasons with the Chicago Bulls, the last nine (1990-1998) coming as Chicago's head coach. In his nine years as the head coach of the Bulls, Jackson led Chicago to championships in 1991, 1992, 1993, 1996, 1997 and 1998 and compiled a regular-season record of 545-193. He reached 200 career victories faster than any coach in NBA history, accomplishing the feat after only 270 games. Jackson's storied basketball career began as a player at the University of North Dakota where he was a two-time All-American under head coach Bill Fitch. Some four decades later in the summer of 2008, he traveled back to North Dakota where he was presented with an honorary Doctorate of Letters from his alma mater. With the first honorary degree being handed out in 1909, other recipients include President John F. Kennedy (1963) among others. Drafted by the New York Knicks in the second round of the 1967 NBA Draft (17th overall pick), he played 12 seasons in the NBA, missing the Knicks 1969-70 championship season due to injury. A key member of New York's 1973 NBA Championship team, Jackson is one of nine men to win an NBA Championship as both a player (2) and head coach (11). On June 8, 1978, Jackson was traded to the New Jersey Nets where he would play his final two NBA seasons. Jackson concluded his NBA career averaging 6. 7 points and 4. 3 rebounds in 807 regular season games. While with the Nets, he served as a player/assistant coach for both the 1978-79 and 1979-80 seasons and joined the bench full-time for the 1980-81 campaign. During the 1981-82 season, Jackson also served as a Nets television analyst. Returning to coaching the following season, Jackson joined the Continental Basketball Association's Albany Patroons where he would coach from 1982-1987. He led the Patroons to the 1984 CBA Championship and was named the CBA's Coach of the Year in 1985. He is the first person to win championships as a head coach in both the NBA and CBA. Engaged to Lakers President Jeanie Buss, Jackson currently resides in Playa del Rey and spends his summers in Montana. He is a father of five grown children (Ben, Charley, Brooke, Chelsea and Elizabeth) and a grandfather of eight grandchildren.