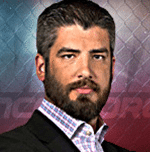 Senior Editor, MMA Fighting Luke Thomas is a leading voice and analyst in the sport of Mixed Martial Arts (MMA) whose work routinely crosses media platforms. He currently works as Senior Editor at MMA Fighting where he guides coverage as well as writes original features for the fastest-growing provider of digital sports content, SB Nation. Thomas is the co-host of Spike TV's 'MMA Uncensored Live' as well as the SiriusXM Fight Club on SirusXM satellite radio. He is a graduate of The College of William & Mary and achieved the rank of Sergeant in the United States Marine Corps Reserve. His work has also appeared in the Washington Post, Salon. com, ESPN. com and dozens of newspapers across the country.