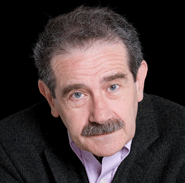 Official Baseball Historian, MLB @thorn_john John Thorn is the Official Historian of Major League Baseball. Apart from his creation, with Pete Palmer, of Total Baseball, he is often visible on ESPN, MLBTV, The History Channel, and other television outlets as a sports authority and commentator. He was also a major on-screen presence in and chief consultant to Ken Burns's PBS film, Baseball. Thorn co-wrote The Hidden Game of Baseball, which established alternative statistics later recognized and adopted as official by Major League Baseball, notably OPS. His many baseball books over the past three decades also include Treasures of the Baseball Hall of Fame, The Game for All America, and Our Game, a history of the game which also supplies the titles his twice-weekly blog at mlb. com . In 2011 Simon & Schuster published his major work, Baseball in the Garden of Eden: A Secret History of the Early Game. Thorn lives in Catskill, New York, with his wife, Erica. He has three sons, Jed (36), Isaac (32), and Mark (26).