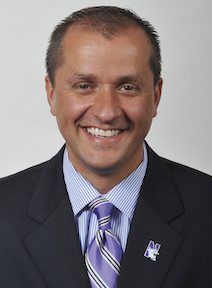 Vice President for Athletics & Recreation, Northwestern University James J. Phillipsbecame Northwestern's 21st director of intercollegiate athletics and recreation on April 14, 2008. In September of 2012 the Board of Trustees elevated him to Vice President for Athletics & Recreation, a title better reflecting his University-wide responsibilities. Phillips has established a culture where every day is spent working to create a world-class experience for Northwestern's nearly 500 student-athletes - academically, socially and athletically. In competition, Northwestern has continued to succeed across the board at a very high level. Since Jim's arrival, lacrosse, wrestling, field hockey, softball, men's & women's golf, fencing, women's tennis, and wrestling all have won team or individual conference championships. During the 2013-14 academic year the Wildcats lacrosse program advanced to its tenth consecutive national semifinal, wrestling boasted its first-ever freshman national champion and women's tennis captured a Big Ten crown for the sixteenth consecutive season. Academically, a school-record 220 Wildcats received Academic All-Big Ten honors in 2013-14, marking the fourth consecutive year where the department topped 200 awards. A school-record Ten teams posted perfect Academic Progress Rate scores for the most recent data, while the football program ranked second in FBS with a 991 score. Northwestern also led the Big Ten in Graduation Success Rate by seven percentage points, and ranked in the Top 3 nationally. Additionally, Northwestern continues to be among the nation's leaders in community service. With every student-athlete contributing, Wildcats combined for more than 5,500 hours of service on behalf of 100 differed organizations in Evanston and throughout Chicagoland. Phillips has embarked on a number of major projects, led by the forthcoming Lakeside Athletics & Recreation Facility that will serve the entire campus community. Recent video upgrades in both Ryan Field and Welsh-Ryan Arena dramatically upgraded the fan experience in the department's two premiere venues. Northwestern launched the first wide-ranging marketing campaign in the history of the athletic department, branded "Chicago's Big Ten Team," in 2010, and announced an innovative partnership with the Chicago Cubs in 2013 that will see Wrigley Field host a number of Wildcats programs in competition over the next several years. In 2013-14 Northwestern established new season ticket records in both football and men's basketball. The department has signed major corporate sponsorship deals with Northwestern Memorial Hospital Kraft Foods and BMO Harris Bank while transitioning to Learfield Sports as its multimedia rights holder in March of 2011 and re-branding the entity Northwestern Sports Properties (NSP). In June of 2014, Jim became the President of the National Association of Collegiate Director's of Athletics (NACDA) by his peers, the first Northwestern AD to hold the position. He recently served two terms as the Athletic Director Chair of the Big Ten Conference, representing the league's A. D. 's on the Executive Committee of the B1G Joint Group, while simultaneously working as a member of the Rose Bowl Management Committee. At Northwestern, Phillips is an Adjunct Professor of Management & Organizations in the prestigious Kellogg School of Management. A 1990 graduate of Illinois, Jim earned a master's degree in education at Arizona State before completing a Ph. D. in educational administration from Tennessee in 2007, where he also served as an assistant athletics director until 2000. Jim and his wife, Laura, have five children: Luke, Madeline, Meredith, John and James.