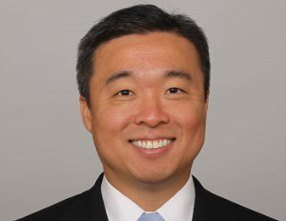 President, Co-Owner San Francisco 49ers Gideon Yu is in his second season as president of the San Francisco 49ers. Yu became a co-owner of the franchise in early 2012. As team president, Yu is tasked with executing Jed York's vision for the team, leading all business, financial and strategic operations of the franchise. In his time with the 49ers, he has spearheaded the team's efforts in financing Levi's Stadium, including securing an $850 million stadium construction loan, the largest ever in professional sports, a $200 million financing package from the NFL and the largest long-term stadium financing in NFL history. Yu also directed the 49ers drive to accelerate the opening date of Levi's Stadium from the 2015 to 2014 season. Yu has also led the implementation of York's ambitious technological and sustainability strategies for the team. Under his direction the 49ers have laid the foundation to transform the franchise and Levi's Stadium into the most technologically advanced in sports. Additionally, the 49ers will have among the most sustainable stadiums in all of sports, being LEED Gold and deriving all of the gameday electrical load, on an annual net basis, from solar power - achieving a net neutral draw on the energy grid. Prior to his career in sports, Yu was a technology executive and investor, most notably the Chief Financial Officer of both Facebook and YouTube, the first two internet companies to achieve one billion active users. He has also worked at such companies as Yahoo and Disney and led the initial investment in and was the first external board member of Square. In 2011, Yu was named to the "Executive Dream Team, Startup Edition" by Fortune Magazine , and listed among the "Names You Need To Know" by Forbes Magazine . Yu earned his BS in Industrial Engineering and Engineering Management from Stanford University, and his MBA from Harvard Business School. He is active philanthropically, sitting on the boards of the Tipping Point Community, UCSF Foundation, and BUILD. Yu also served on the Bay Area's Super Bowl Bid Committee, which was successful in bringing Super Bowl L to the region. A native of Nashville, Tenn. , Yu and his wife, Susie, have a son, Jonathan, and a daughter, Emily. You can follow Gideon on Twitter @gideonyu .