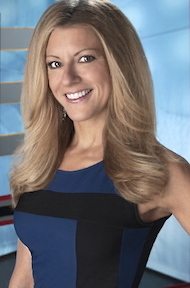 Vice President, Content and Brand Development, Campus Insiders Bonnie Bernstein is recognized by the American Sportscasters Association as one of the most accomplished female journalists in her field. After spending 17 years covering some of the nation's most prestigious sports events on-air for ESPN and CBS, she is now helping build a network both in front of and behind the camera. Bernstein is the "face" and Vice President, Content and Brand Development, of Campus Insiders , a digital collaboration between IMG College, America's premier college sports marketing company, and Silver Chalice Ventures. SCV is founded by Chicago White Sox and Bulls owner, Jerry Reinsdorf. Bernstein hosts a daily show during the college football season and NCAA Basketball Championship; her efforts elsewhere are focused on creating original programming for the network, developing and securing new sponsor partnerships, and designing brand extensions that enhance the reach of CI's digital and social platforms. Additionally, Bernstein is the lone female fill-in host for the nationally syndicated TV/radio program, The Dan Patrick Show. Bernstein's foray into the executive world comes after six years with the ESPN family in a variety of roles. She hosted several high profile shows for "The Worldwide Leader," including NFL Live, Outside the Lines, Jim Rome is Burning and First Take; seasoned her radio chops as host of New York Football Live on ESPN Radio in New York; canvassed the sidelines for Sunday Night Baseball and ESPN on ABC College Football ; and created, executive produced and hosted a series for espnW showcasing prominent women who were competitive athlete in their youth. Prior to her second run at ESPN, Bernstein spent eight years at CBS, where she was the Lead Reporter for the NFL and the NCAA Men's Basketball Championships. She contributed features for The NFL Today ; hosted the NCAA Women's Gymnastics Championships as well as the Network's Emmy-nominated anthology series, Championships of the NCAA ; and anchored CBS' studio shows, SportsDesk and At the Half . Track and field, figure skating, and the U. S. Open Tennis Championships rounded out her assignments at the Network. During Super Bowl XXXVIII, Bernstein became the first sideline reporter to serve as both a network TV (CBS) and network radio (Westwood One) correspondent on the same broadcast. Bernstein first joined ESPN in 1995 as its Chicago Bureau Chief, where she covered Michael Jordan and the Bulls' second historic "three-peat. " She also filed game reports and features for SportsCenter, Baseball Tonight, NFL Countdown and College GameDay. In 1993, Bernstein made local television history at KRNV-TV in Reno, NV (NBC), as the "Biggest Little City's" first-ever female weekday sports anchor. She began her television career at WMDT-TV (ABC) in Salisbury, MD, anchoring weekend news, and broke into broadcasting in radio as the News and Sports Director for WXJN-FM in Lewes, DE. Outside of broadcasting, Bernstein is a passionate public health advocate. She is an Ambassador for ING KiDSRock, a school-based youth fitness program, and Co-Chaired the Coalition supporting congressional passage of the National Foundation on Fitness, Sports and Nutrition, which raises private funds for childhood obesity initiatives. Additionally, Bernstein is the Co-National Spokesperson for the Coalition to Prevent Deep Vein Thrombosis . Since surviving near-fatal blood clots in 2006, she has canvassed the country promoting DVT education and awareness and helped influence federal DVT legislation and a "call to action" issued by the U. S. Surgeon General. Numerous publications have documented Bernstein's work, including The New York Times , USA Today , Sports Illustrated and TV Guide and lifestyle magazines such as Glamour, Self, Men's Health and Celebrity Living. In 2010, she received Pop Warner's "Female Achievement Award" for serving as a positive role model for kids. Bernstein has been named one of New York Moves Magazine's "Power Women" and Jewish Women International has included her on its "Ten Women to Watch" list, an exclusive group selected from the United States, Canada and Israel for their professional achievements. Bernstein graduated Magna Cum Laude from the University of Maryland's prestigious Merrill College of Journalism. She currently serves on the College's Board of Visitors as well as the Advisory Board for the Shirley Povich Center for Sports Journalism. While at College Park, Bernstein was a four-time Academic All-America selection (gymnastics) and received the Thomas M. Fields Award for academic and athletic excellence. Bernstein was born in Brooklyn, N. Y. , and grew up in Howell, N. J. She presently resides in New York City.