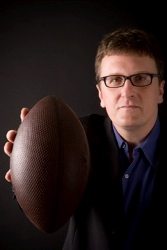 Author and Journalist, Forbes. com Allen St. John is a New York Times bestselling author and an award winning journalist and contributor to Forbes. com . His latest book is Newton's Football: The Science Behind America's Game , co-written withAinissaRamirez and published last fall by Ballantine Books. His other works include The Billion Dollar Game: Behind the Scenes at the Super Bowl and Clapton's Guitar: Watching Wayne Henderson Build the Perfect Instrument . A pioneer in bringing sports analytics to a mass audience. St. John wrote the popular "The By The Numbers"column for TheWall Street Journal for five years. He has written about sports for a a wide variety of national publications including Rolling Stone, Playboy, Maxim, The Village Voice, Men's Journal, Esquire. com and The New York Times Magazine . He is a graduate of The University of Chicago, and lives in Upper Montclair NJ.