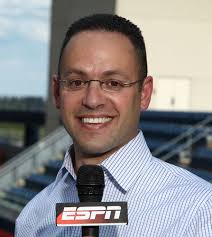 Mike Reiss first started reporting on the New England Patriots in 1997 for the team's official newspaper and is now in his fourth season doing so for ESPNBoston. com. Having covered the team over parts of the last three decades, he is one of the leading voices when it comes to Patriots football. Mike is a lifelong New Englander, having grown up in Framingham, Mass. , and later attending the University of Massachusetts-Amherst (BS Sports Management, 1997). After writing for Patriots Football Weekly and producing both written and video content for Patriots. com from 1997-1999, he worked as a reporter and assistant sports editor at the MetroWest Daily News from 1999-2005, before moving on to the Boston Globe as both a Patriots and NFL reporter (2005-2009). One of the staples of Mike's work has been embracing the World Wide Web to cover the Patriots in a non-traditional, immediate and more interactive way. He started his popular "Reiss' Pieces" Patriots blog in 2004 and embraced reader interaction through a weekly mailbag that first started in 2005. He also holds weekly online Patriots chats and makes regular appearances on ESPN's various platforms, including serving as an on-site reporter for NFL Sunday Countdown and SportsCenter. Mike is married, and he and his wife have two children. They live in suburban Boston. - See more at: http://www. mikereiss. net/#sthash. gFbCxKV5. dpuf