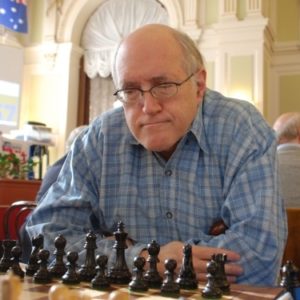 Born in Washington D.C. in 1947 (still living in D.C. area), American Open Chess Champion 1966, graduated from M.I.T. (where I worked on “MacHack”, the first computer to compete in human chess tournaments) in 1968. President of Chess Options Corp. 1977 to 1986. International Master chess title 1980. Became top ranked non-Japanese player of shogi (Japanese chess) in the 1980s. Chairman of US Chess Federation ratings committee 1980 to 1986. Editor of “Computer Chess Reports” in late 1980s. Co-author with Don Dailey of several chess programs between 1987 and 1994, and also from 2008 until his death in 2013. Author of three chess books in the current century. Worked on “Rybka” (then the world’s strongest chess engine) 2007-2008. Won World Senior Chess Championship and Grandmaster title in 2008. Partner in KomodoChess (which has been ranked first, second, or third on most rating lists in the past five years and has won many world championships) 2009 to present. Three children, one (Raymond) is an International Master in chess.