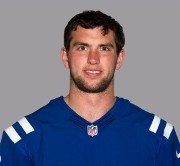 Quarterback, Indianapolis Colts Andrew Luck is an NFL quarterback playing for the Indianapolis Colts. The #1 overall draft pick in the 2012 NFL Draft, Luck has led the Colts to two straight playoff appearances as well as setting several NFL passing records. He has also been selected to the Pro Bowl in each of his first two seasons. Luck attended Stanford University and graduated with a degree in Architectural Design in May, 2012. During his tenure as quarterback for the Cardinal, he guided the team three straight Bowl Game appearances. He holds multiple NCAA, PAC12 and Stanford records and was an Academic All-American. Born in Washington D. C. and raised in Europe until the age of 11, Luck attended high school in Houston, TX where he was valedictorian of Stratford High School.