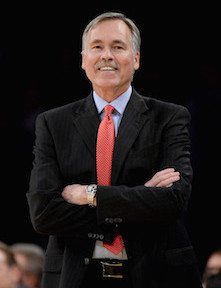 Former NBA Head Coach Mike D'Antoni is a pioneer of the game of basketball who has won NBA Coach of the Year, Italian League Coach of the Year and an Olympic gold medal. He has over thirty years of international experience both as a player and coach. D'Antoni was a student-athlete at Marshall University before going on to play professional basketball in the NBA, ABA and in Italy. Following his playing career, D'Antoni spent eight years coaching professionally in Italy for Philips Milan and Benetton Treviso. During his tenure D'Antoni guided Philips Milan to an Italian League regular season crown and a Korac Cup. His Benetton team captured the Cup of Europe, Cup of Italy and Italian League title. He was voted the Italian League's Coach of the Year twice. Mike is a dual citizen of the United States and Italy making him the first Italian-American NBA Head Coach. He has spent eleven seasons as a Head Coach in the NBA, leading the Denver Nuggets, Phoenix Suns, New York Knicks and Los Angeles Lakers. In 2005, while leading the Phoenix Suns, he was named the NBA Coach of the Year. During international competition, D'Antoni served as an assistant coach under Mike Krzyzewski on the gold medal-winning US Men's National Basketball Team during the 2012 London and 2008 Beijing Olympics. D'Antoni has made an exceptional impact on the game of basketball worldwide. He has a keen eye for adapting the modern game; known best for his innovative offensive tactics and the 7 Seconds or Less philosophy. Coach D'Antoni continues to remain in high regard in both NBA and International basketball circles.