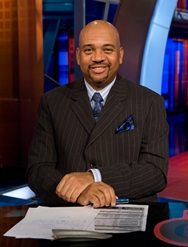 Pardon the Interruption, Co-Host; NBA Studio Analyst; Columnist, ESPN. com and ESPNChicago. com @RealMikeWilbon Michael Wilbon is co-host of ESPN's award-winning show Pardon the Interruption, a contributor to ESPN and ABC's coverage of the NBA and a columnist for ESPN. com. Wilbon left The Washington Post after 30 years as a reporter and columnist to assume an expanded role with ESPN and ABC. Wilbon also appears weekly on ESPN Radio 1000 in Chicago, ESPN 980 in Washington, D. C. with Kornheiser and with Scott Van Pelt on ESPN Radio. He began his career at The Washington Post in 1980 after consecutive summers as an intern at The Post. And after working as a reporter for 10 years he was a sports columnist from 1990-2010, commenting as much on the issues of the day as they related to sports as what transpired on the fields or courts. During his years at The Post Wilbon also edited two books with his friend, Basketball Hall of Famer Charles Barkley: I May Be Wrong but I Doubt It and Who's Afraid of a Large Black Man? Both books made the New York Times best-sellers list. Also during that ti8me Wilbon appeared as panelist on WRC-TV-4s "Redskins Report" and "Full Court Press" with George Michael. In 2009 Wilbon was honored by the National Association of Black Journalists with the organization's Lifetime Achievement Award. Two years earlier he and Kornheiser received The Post's prestigious Eugene Meyer Award. And in 2001 Wilbon was recognized by Sigma Delta Chi, the Society of Professional Journalists, as the top sports columnist in America. In 1997 he was included in the inaugural class of Northwestern University's Hall of Achievement. And in March of 2011 he was inducted into the D. C. Sports Hall of Fame for his coverage and commentary on sports in and around the Nation's Capital.