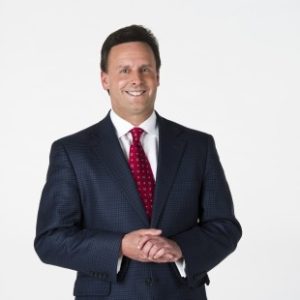 Karl Ravech is the primary host of ESPN's MLB studio and pre-game show, Baseball Tonight and has been a regular part of the Monday Night Baseball team since the 2016 season. Ravech also voiced ESPN's 2017 Home Run Derby telecast. He joined ESPN in May 1993 and has hosted ESPN's studio coverage of the MLB playoffs and World Series since 1995. Since 2006, Ravech has provided commentary for ESPN and ABC coverage of the Little League World Series in Williamsport, Pa. In 2011, he added the Little League World Series Championship games and the College World Series to his yearly schedule. During the winter, Ravech is a play-by-play commentator on ESPN's college basketball telecasts. Ravech has also anchored ESPN's college basketball studio wraps operation. Additionally, in the fall of 2000, Ravech followed Tiger Woods' quest for the Grand Slam while hosting ESPN's golf coverage at Pebble Beach, St. Andrews and Valhalla.