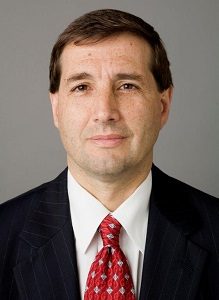 Jeffrey Pash joined the National Football League in January 1997, and is currently Executive Vice President. In that capacity, he serves as the League's principal in-house counsel and oversees labor relations, security and internal audit. Prior to joining the NFL, Mr. Pash was Senior Vice President and General Counsel at the National Hockey League, where he served as the senior legal and policy advisor to Commissioner Gary Bettman. He began his professional career with the Washington, D. C. firm of Covington & Burling, where he practiced law from 1980 to 1993, becoming a partner in the firm in 1988. While at Covington & Burling, he was heavily involved in the firm's sports practice, and worked on a wide range of litigation, legislative, labor and other matters for the NFL and other clients in the firm. Mr. Pash has taught sports law as an Adjunct Professor at Georgetown University Law School, and as a lecturer at the University of Virginia Law School. He has also appeared on numerous programs sponsored by the American Bar Association, Practicing Law Institute, Sports Lawyers Association and other academic and professional organizations. Mr. Pash is a graduate of Harvard College and Harvard Law School. He and his wife, Betsy, live in New York with their four children.