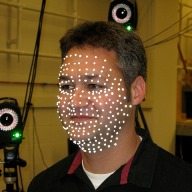 Iain Matthews is a Principal Research Scientist and the Associate Research Director at Disney Research in Pittsburgh. He received a BEng degree in electronic engineering in 1994, and a PhD in computer vision in 1998, from the University of East Anglia, UK. He was Systems Faculty in the Robotics Institute at Carnegie Mellon University until 2006 working on face modelling and vision based tracking. He spent two years at Weta Digital, NZ, as part of the team that developed the facial motion capture system for the movies Avatar and Tintin. In 2008 he joined the newly formed Disney Research in Pittsburgh as a Senior Research Scientist leading the computer vision group. He holds an adjunct faculty appointment in the Robotics Institute at CMU. Iain is a member of the IET, IEEE and ACM.