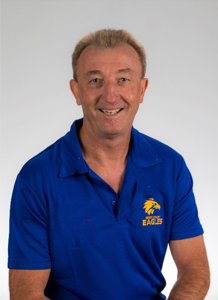 Glenn Stewart is currently the High Performance Manager of the 2018 Australian Football League Premiership winners, the West Coast Eagles. He has been in that role since 1997. Prior to that, he was their Strength Coach from 1992 and was awarded Life Membership in 2011.

He has been involved with the club for 20 Finals campaigns, which have included 6 Grand Finals and ultimately, 4 Premierships – making them one of the most consistent and successful teams in the League’s history.

Glenn has a Master’s Degree in Physical Education and a Diploma in Education from the University of Western Australia. He is also a Level 5 coach with the Australian Track and Field Coaches Association and, in that sport, has coached athletes to the Olympic Games, Commonwealth Games and World Cup. He is a former Australian representative in the long jump.

He has written two coaching books (‘Speed To Win’ and ‘Strength and Conditioning for Netball’) and contributed a chapter to the book ‘High Performance Training for Sports’.

He has co-authored a number of published research papers through the West Coast Eagles and is well known for his contribution and dedication to the sport science community.