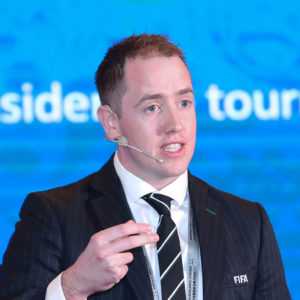 Chris Loxston is the manager of Performance & Game Analysis at FIFA in Zurich, Switzerland. The recent integration of advanced performance data analytics and video analysis into FIFA Technical Study Group (TSG) review of the 2018 FIFA World Cup in Russia was the first step forward in driving a new approach. This new approach supported expert tournament observations with advanced performance data analytics. FIFA’s TSG is responsible for the observation of all FIFA tournaments, both junior and senior, across the Men’s and Women’s game and used to support and drive coach and player education and development around the World.

Chris started his career in sports performance analysis at the English Institute of Sport. There he supported British teams at World, European and Commonwealth tournaments along with the qualification to the 2008 Beijing Olympic Games and 2012 London Olympic Games. Chris then moved to Asia where he implemented his Performance Analysis skill set within football (soccer) working with both domestic and international football teams. Finally, before starting at FIFA in 2018 he supported the International Olympic Committee (IOC) with bespoke data analytics around injury occurrence hurt analysis within Olympic and World amateur boxing.